Welcome to the Indian Affairs page! Atta Kulla Kulla has a nationaly respected IA team and is always available to 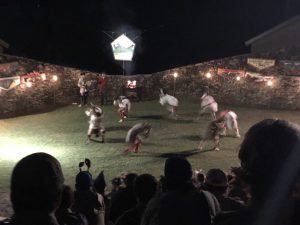 Although the Order of the Arrow Strategic Plan developed in 1998 calls for increased emphasis of imagery about the arrow and reduced emphasis on Native American imagery, the study of the ways of the Native American peoples remains an important area to study. This is necessary to avoid making offensive use of Native American culture.

In the past, some in the Order have used terms that are offensive stereotypes of Native American culture. References to ‘braves,’ ‘squaws,’ and ‘tomahawks’; performing dances that have religious significance to specific Native American groups; and the use of face painting are examples of offensive practices.

To show respect for Native Americans, it is no longer permitted to perform the Eagle dance or use the movements found in other religious dances. Face painting is no longer used in performing ceremonies of the Order. Some lodges, such as the Braves of Decorah lodge, have changed their lodge name in consultation with Native American groups
in their area.

The ceremonies of the Order of the Arrow were developed from the history of the Delaware Indians, who referred to themselves as the Lenni Lenape, combined with elements from James Fennimore Cooper’s book The Last of the Mohicans.

Some individual Native Americans may still find fault with people who are not Native Americans performing ceremonies and dances. It is not possible to please everyone no matter what you do, so members of the Order should note that their practices are discussed at length with representatives of other tribes and found acceptable. This approval puts such critics in the odd position of attempting to dictate practices to other
Native American groups.

The Vice Chief of Indian Affairs reviews the practices of Atta Kulla Kulla Lodge for Native American ceremonies with various Advisers and representatives of Native American groups, such as the Cherokee.